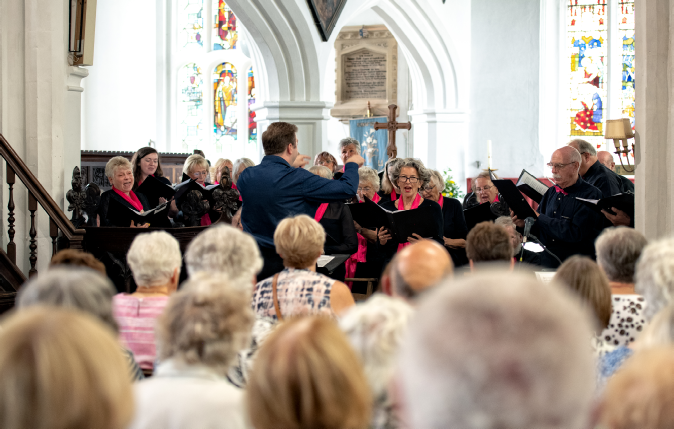 Sounds of stage and screen echo around historic church at concert

The Hedingham Singers performed soaring renditions of tracks featured in both classic movies and some of the West End's best-loved musicals.

Songs from hit films and stage plays such as Oliver!, My Fair Lady and The Phantom of the Opera reverberated off of the buildings ancient walls as the afternoon raised more than £800 for the Gosfield War memorial project, which wants to install a new war memorial in the village.

Hedingham Singers chairman Bob Lilley was glad to see the talented group's show impress the audience and help the cause.  He said: “The Hedingham Singers were particularly pleased to be asked to partake as one of the very worthy fund raising schemes that have been planned by the Gosfield war memorial committee.

“A concert of music old and new was presented to a full house at St Catherine's and we were very pleased to see that they enjoyed the programme as much as we did in singing it.

“I would endorse a comment from our musical director, Thomas Duchan in saying how wonderful it was to share our music with the community”

If you missed this concert, an extended version will be performed at St Andrew's Church, Earls Colne on Saturday 28th September at 7.30pm.  The concert is being organised in conjunction with the Rotary Club of Halstead as part of their 70th birthdays celebrations.

A Great Saturday Night At The Movies!

We were pleased to welcome back Thomas Duchan to the Musical Director's podium and Sue Long as our accompanist, with both of them proving their musical talents with piano duet arrangements of “Schindler's List” and  “Star Wars” main themes.  The Singers also proved their versatility, not only with the vocals of well known songs, ranging from “The Way You Look Tonight” from the 1936 film “Swing Time” and then coming up to date with “Bohemian Rhapsody” from the 2018 film of the same title. but also on some more unusual numbers including a vocal version of “Also Sprach Zarathustra” from “2001 – A Space Odyssey” and the Basses and Tenors marching along to the main theme from “The Great Escape”.

If you missed this wide screen performance, an updated version will be presented at St Andrew's Church, Earls Colne on Saturday 28th September, celebrating 70 years of The Rotary Club of Halstead.  See our Concerts page for further details of our next showing of “Saturday Night At The Movies”

The seventy singers of the Braintree Male Voice Choir and The Hedingham Singers  will be joining in harmony for the “With One Voice” concert at The Empire Theatre, Butler Road, Halstead on Saturday 29th June, starting at 7.30pm.  Tickets, costing £10.00 each are now on sale from the theatre box office – 07778 025490, or book on line at www.empire-theatre.co.uk

With One Voice Concert

The Hedingham Singers were honoured to be asked by the Braintree Male Voice Choir to take part in their “WITH ONE VOICE – SEVENTY SINGERS IN HARMONY” concert at the Empire Theatre, Halstead, on Saturday 29th June.

Both choirs share Musical Director, Thomas Duchan, who conducted them on stage individually with a selection of musical pieces and then the choirs combined to perform two numbers - “I Believe” and “Rhythm of Life”, much to the delight of the audience.

Amongst the audience was Pat Rudkins, who's Curtain Call review was published in the Halstead Gazette:

2020 will be the 75th anniversary of the end of the Second World War in Europe. There will be national and local events taking place over the weekend and The Hedingham Singers are pleased to announce that the Essex Police Band will be joining us to celebrate the occasion with a special concert “We'll Meet Again” at St Andrew's Church, Halstead on Saturday 8th May, starting at 7.30pm.  As the title suggests the concert will feature many favourites from the 1940's  from both the band and the choir, plus there will be a traditional patriotic finale -  so bring along your flags.

Strike Up The Band for the VE Day Holiday Weekend

The Hedingham Singers were pleased to be asked to sing at a concert held in St Catherine's Church, Gosfield on 4th August to raise funds for Gosfield's new war memorial.  The concert received big coverage in the following week's HALSTEAD GAZETTE – this is part of what they reported:

Following our successful “Saturday Night at The Movies” concerts throughout the summer months, the Singers are now busy rehearsing for the annual Concert for Christmas.  As usual, the concert will contain seasonal favourites and the audience will be able to join in the well known carols, plus once again, local flautist Jessie Tabor will be joining us.  However, our Musical Director Thomas Duchan, is stretching our musical abilities and confidence with a performance of Vivaldi's “Gloria”, accompanied by a small orchestra.  As rehearsals have progressed we are all beginning to enjoy this classical Christmas oratorio, and we are sure the audience will be impressed by our performance.  Concert for Christmas 2019 will be performed at St Peter's Church, Sible Hedingham on Sunday 15th December and on Saturday 21st December at St Andrew's Church, Halstead.  Both concerts start at 7.30pm and tickets £10.00 each, which includes mulled wine and mince pies at the interval are available on 07790 573435, or on the door.

A Concert for Christmas 2019

The Hedingham Singers will be back at this year's Halstead Christmas Fair on Saturday 30th November. We will be singing outside the East of England Coop in Weavers Court from 11am, so come along and join in with us.
On the same day, St Andrew's Church, Halstead will be holding their Christmas Tree Festival featuring trees decorated by local groups and organisations. The Singer's music themed Christmas Tree will be on display, so after the carols pop into the church and vote for our tree.

In Spring 2019 we were sad to lose our previous Musical Director Alexander Binns However, we were pleased to hear that Alex has settled in his new job as Musical Director at Derby Cathedral and in his spare time has become the MD of a local amateur choir Derventio, based in nearby Allestree. 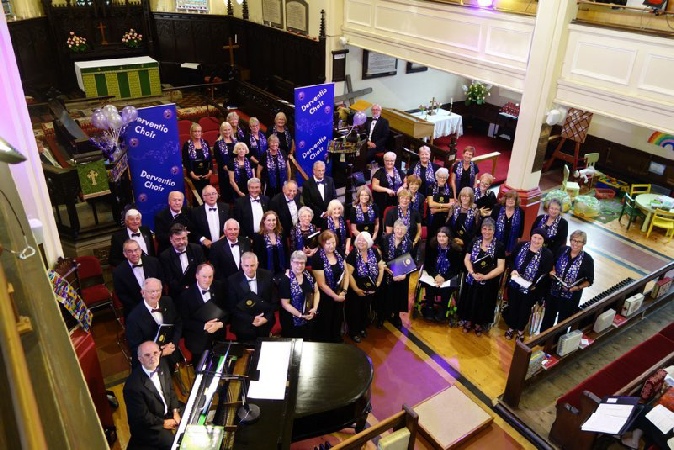 Derventio is similar in size to The Singers and perform a similar diverse repertoire in local churches throughout the area raising money for local charities.  Alex has invited The Hedingham Singers to join together with Derventio for a concert to be held in Derby on Saturday 30th May, when thirty plus members of our choir will be heading up north!

We will be reciprocating with an invitation for Alex and his choir to join us down south later this year at St Andrew's Church, Halstead on Saturday 26th September

Did you know that whenever you buy anything online – from your weekly shop to your annual holiday – you could be raising free donations for The Hedingham Singers with easyfundraising?

There are over 4,000 shops and sites on board ready to make a donation – including eBay, Argos, John Lewis, ASOS, Booking.com and M&S – and it won’t cost you a penny extra to help us raise funds.

All you need to do is:

1. Go to https://www.easyfundraising.org.uk/causes/thehedinghamsingers/?utm_campaign=raise-more and join for free.

2. Every time you shop online, go to easyfundraising first to find the site you want and start shopping.

3. After you’ve checked out, the retailer will make a donation to The Hedingham Singers at no extra cost to you whatsoever!

There are no catches or hidden charges and The Hedingham Singers will be really grateful for your donations.

Thank you for your support.