December has been a busy month for The Hedingham Singers with two performances of our popular Concert for Christmas, first at St Andrew's Church, Earls Colne, followed a week later by a second performance at St Nicholas' Church, Castle Hedingham. The church at Castle Hedingham was packed full of concert goers who enjoyed an evening of carols from around the world, including one sung in Greek, and joining in with some of the more traditional carols, and participating in a rousing version of  “The Twelve Days of Christmas”  Unfortunately, the audience at Earls Colne was not as big as usual, but that did not stop the singers putting on a great performance, as noted by Pat Rudkin, in her “Curtain Call” review in the Halstead Gazette.

A Concert for Christmas was beautifully arranged by The Hedingham Singers and was worthy of a much bigger audience at St Andrew's Church, Earls Colne.

Some members of the choir also took part in this year's Castle Hedingham Advent Calendar festivities, in which a different window in the village is opened every day to reval a Christmas scene.  When the window at the village Community Shop was opened, it revealed our singers, dressed appropriately as Victorian style carol singers.  Following the unveiling, our singers dropped in the local hostelry for some warming liquid refreshment and ended up performing an impromptu concert of popular carols. 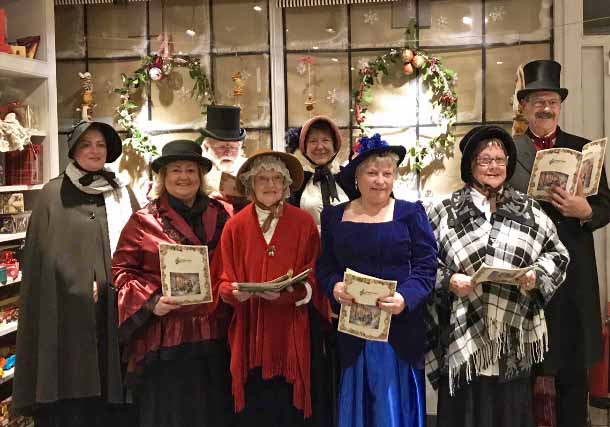 Finally, more of our singers became the church choir for the annual carol concert at
Stambourne Parish Church.

Due to circumstances beyond our control the Halstead Rotary Celebration Concert scheduled to be held on the 25th May at St Andrews Church, Earls Colne has had to be postponed until the Autumn.  However The Hedingham Singers will now be presenting a concert of songs from the movies on the same date, but at St Nicholas' Church, Castle Hedingham, where we hope literally to raise the roof with our singing as we will be helping The Friends of St Nicholas Church to raise funds to keep the church standing.  Full details will shortly appear on our Concerts page.

It is going to be all change at The Hedingham Singers, as we sadly say goodbye to our present Musical Director, Alexander Binns. Alex joined us in September 2017, having picked up the baton from Thomas Duchan, and expecting to be our MD for some years as he had just been appointed Assistant Director of Music at St Edmundsbury Cathedral, Bury St Edmunds, and had moved to the town, with his then partner, now his wife, Dora. However, at the beginning of this year, Alex was appointed Director of Music at Derby Cathedral and will be moving to the city with his wife and baby son, Paul in April.

Fortunately the music will not be stopping as Thomas Duchan will be rejoining us as Alex leaves, resuming his role as Musical Director. Thomas brings with him a wealth of experience and will immediately continue with the rehearsals for our concert at the end of May, plus start planning the programme for the rescheduled Halstead Rotary Concert in September (see below) plus our popular annual Concert for Christmas in December.

We wish Alexander every success in his new role and thank him for leading the Singers over the past 17 months, and warmly welcome back Thomas.

Dates have been announced for four concerts featuring The Hedingham Singers in 2019. Continuing our long association with Halstead Rotary we will be presenting an Anniversary Concert on Saturday 25th May at St Andrew's Church, Earls Colne.

For the first time, we shall be joining with Braintree Male Voice Choir for a combined concert on Saturday 29th June at the Empire Theatre, Halstead.

Finally, our popular “Concert for Christmas” takes to the road again, with a performance on Sunday 15th December at St Peter's Church, Sible Hedingham, and on Saturday 21st December at St Andrew's Church, Halstead.

All dates are provisional and concert details may be subject to change so for the latest updates and further information  regularly check our web site.