The Hedingham Singers were proud to take part in Halstead's World War 1 Centenary Celebrations held on a hot sunny day at the end of June. Halstead Public Gardens was full of stalls provided by local groups and organisations, and the public turned out in force to support the event. The Singers took to the bandstand and entertained the crowds with a selection of songs from our recent “Sky Full Of Songs” concert plus some sing-a-long World War 1 favourites.

A SKY FULL OF SONGS

Over 200 people came to our two summer concerts in May and June at St Giles' Church, Great Maplestead, in aid of Rotary Club of Halstead Charities, and at St Andrew's Church Halstead, in aid of St Andrew's and St Catherine's, Gosfield church funds.  The concert featured a wide selection of music including choral works by Haydn, modern arrangements by John Rutter, traditional sea songs, film music, and even the Coldplay number “A Sky Full of Stars”  The concert theme of land, sea and air was reflected by poems, an organ version of Sir Henry Wood's Fantasia on British Sea Songs, performed by our Musical Director Alexander Binns and a violin solo by Dora Chatzigeorgiou.

Amongst the audience was Halstead Gazette's Music and Theatre Critic, Pat Rudkins, who posted the following review. 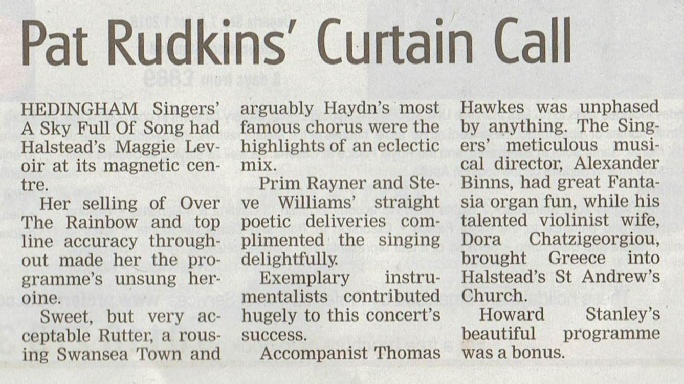 St Peter's Church, Sible Hedingham was full to capacity on  the night of Saturday 10th November as local people and  members of local organisations joined with The Hedingham Singers to commemorate the signing of the Armistice 100 years ago.

Led by Musical Director Aleander Binns, and accompanied by Thomas Hawkes, the first half of the concert featured songs that the soldiers of the first world war used to sing, including “Pack Up Your Troubles”, “Daisy Bell” and “Good-Bye-Ee”.  After the interval the audience joined with the choir in an act of remembrance which included music by Hubert Parry, Howard Goodall and Edward Elgar. Soloist Tudor Weyers, a chorister at St Edmundsbury Cathedral, Bury St Edmunds performed Faure's “Pie Jesu” and the first verse of “The Lord Is My Shepherd”.   A two minute silence was preceded by The Last Post and ended with Reveille, both played on the cornet by Ted Hawkes.

Amongst the music were poems written by four famous “war poets”; “The Soldier”, by Rupert Brooke, ready by Sam Heather, 1st Castle Hedingham Scouts, “Dulce et Decorum Est” by Wilfred Owen, read by Steve Williams, “In Flanders Fields” read by Maggie Parmenter and “For The Fallen” read by Maggie Levoir –  all members of The Singers.

A visual presentation featuring images of the First World War was produced by Peter Earey, and with contributions from The Royal British Legion, Hedinghams Branch, and 1st Castle Hedingham Scouts, made the occasion a fitting tribute to those who gave their lives for our country, ensuring that WE WILL REMEMBER THEM.

A CONCERTS FULL OF “GOODIES”

Our first ever concert held at St Andrew's Church, Earls Colne on December 2nd was a great success, with members of the audience enjoying a varied selection of sacred and seasonal favourites plus the chance to join in with the choir singing well know carols.  Special guest, local flautist, Jessie Tabor, proved a delight, and our new accompanist Christopher More proved to be not only an excellent piano player, but also a virtuoso on the the church organ,  Alexander also showed off his organ playing skills with a triumphant rendition of "Sleigh Ride".  Reviewing the concert in the Halstead Gazette, Pat Rudkins wrote

Regrettably because of the storm Caroline's snowfall and freezing conditions we had to cancel the performance of our Concert for Christmas at St Nicholas Church, Castle Hedingham on Sunday 10th December.  Hopefully we will be back in December 2018 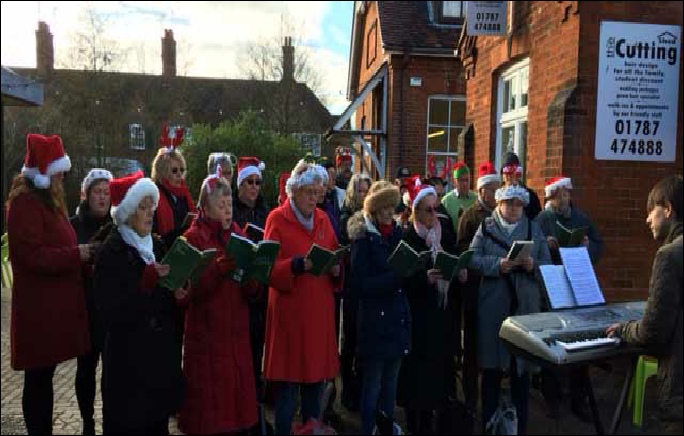 OUR SINGERS GET IN THE FESTIVE SPIRIT

The Hedingham Singers recently took time off from practicing for their “A Concert for Christmas” performances to go and sing carols at the Halstead Christmas Fayre on Saturday 25th November.

Led by our Musical Director, Alexander Binns, we entertained shoppers in Weavers Court with an hour- long programme of carols and popular seasonal songs.

Despite the chilly weather, we gathered a crowd of spectators and hopefully warmed them up with our singing and putting them in the Christmas spirit!

2018 is going to be a busy year for The Hedingham Singers with five concert dates announced.  First off is our concert at St Andrew’s Church, Halstead on 23rd June.  Entitled "A Sky Full Of Songs", it will feature a wide selection of pieces ranging from choral to Coldplay focusing on the land, sea and sky.  That will be followed by a lunchtime concert at Bury St Edmunds’ Cathedral on Saturday 7th July.

November 11th this year commemorates 100 years of the signing of the Armistice which bought the First World War to an end after four years of bitter fighting and millions of deaths on both sides.  We will be remembering and paying tribute to the fallen with a special concert of music and readings to be held at St Peter’s Church, Sible Hedingham on Saturday 10th November.

Finally, by popular request our Concert For Christmas will once again be held at St Andrew’s Church, Earls Colne on Saturday 1st December, and (snow permitting) at St Nicholas’ Church, Castle Hedingham on Sunday 9th December, complete with the mince pies and mulled wine!

Further details and ticket availability for the above concerts will be announced soon, so make sure you keep regularly up to date by logging onto our web site. 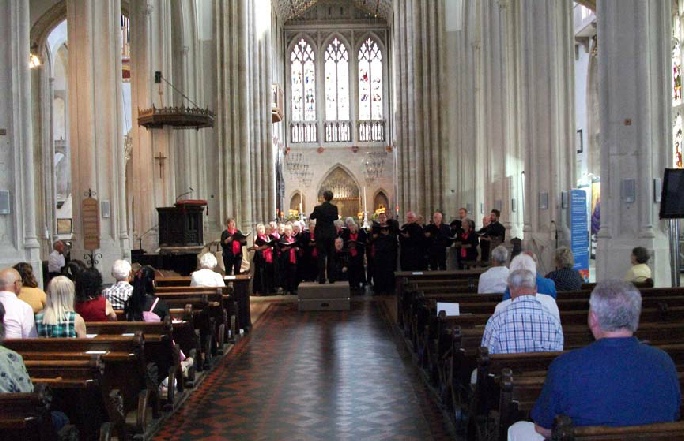 On Saturday 7th July, The Hedingham Singers were invited to perform at St Edmunsbury Cathedral, Bury St Edmunds at one of their lunchtime concerts. Despite it being one of the hottest days of the year and England was playing Sweden in the FIFA World Cup the same afternoon, we had a sizeable audience who having escaped the heat outside, enjoyed our varied selection of music.